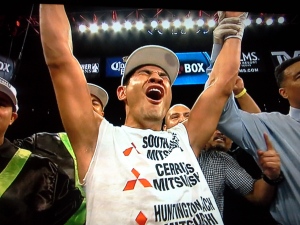 It is a lonely time for a boxer when they hit the canvas, their mind suddenly trying to process why the crowd is blurrily at eye level, their sounds muffled. Everything is in slow motion as the referee comes into focus, their voice counting numbers. J’Leon Love from Inkster, Michigan 18-1, (1 No Contest 10KO) was in such a position on Saturday night after being crushed by a devastating left hook at the hands of Rogelio “Porky” Medina 33-6 (27 KO) of San Luis, Sanora Mexico and was knocked out in the third round in Saturday’s ShoBox Main Event from the Pearl at The Palms Casino Resort in Las Vegas, Nevada.

Love was headlining a ShoBox card which was showcasing three highly touted super middleweights with something to prove and all promoted by Floyd Mayweather and Mayweather Promotions, Love, Badou Jack, and Ronald Gavril.

In the first round, Love used his 4 ½ inch reach advantage and jabbed Medina while landing a few body shots. Love was using a lot of movement as Medina stalked him and landed a few power shots of his own. Love had been down in his last fight against Marco Antonio Perriban so it was wise to jab and move away from the power punching Medina. In the second round, Medina landed the stronger shots and continued stalking Love as Love continued to use his jab and move while trying to land his right.

In previous fights, Love had shown a weakness to keep his chin straight up during exchanges and Medina was there to exploit it in the third. Medina stalked Love into the corner and landed a picture perfect left hook that had Love out on his feet. As Love was falling, Medina landed a small left uppercut as Love fell face first into the mat, his legs twitching as he lay on the canvas. Love tried to get up stumbling into the ropes from his knees causing Referee Tony Weeks to wave the fight off at 39 seconds of round three.

This is a devastating setback for Love who had hoped to be in line for bigger fights. He must now pick up the pieces and start his journey over again after a knockout loss. He doesn’t have to go far to find guidance on what that will take. He need only go back to the gym and consult with his stablemate Badou Jack who did just that on Saturday night.

Badou Jack 17-1-1 (11 KO) from Stockholm, Sweden had experienced what happened to Love in his last fight. Not comparable in the brutality of how it happened but in tasting the canvas and losing by knockout. Jack needed to prove in this fight against Jason Escalera 15-3-1 (12KO) of Union City, New Jersey that he wasn’t the fighter who lost to Derek Edwards by KO but more so the fighter who beat the aforementioned Medina by TKO.

Jack fought the first round like he had one goal in mind, survive the round. Although Jack fought very cautious, he exhibited a good jab, worked to the body, and used lateral movement.  Escalera was just looking for one shot trying to repeat what Edwards had done. Round one to Jack, mission accomplished.

Jack controlled the early rounds by utilizing his jab to the body and then to the head while landing timely counter rights. He wobbled Escalera in round three but Escalera recovered quickly and made it a non-issue. Jack picked up the pace and pressed the action in the middle to late rounds as he began to get more confident that Escalera could not hurt him.  He continued to lad his jab and landed a few body shots from time to time. Jack showed good speed and lateral movement on his way to earning a dominant unanimous decision with scores of  100-90 X 2 and 99-91  Escalera actually threw 177 more punches than Jack but Jack was far superior in connection rate landing 158 more.

In the first bout of the night, Ronald Gavril of Bacau, Romania raised his record to 10-0 (8KO) by defeating Thomas Falowo 12-3 (8 KO) of Pawtucket Rhode Island by seventh round TKO.

In the seventh round, Gavil landed a right to the temple of Falowo’s head sending Falowo to the ropes. Gavril observed that Falowo was dazed by the shot and unloaded with right and left hooks and body shots causing Referee Robert Byrd to stop the fight at two minutes fourteen seconds of the seventh round. Falowo, who also was dropped in the third round, was game but clearly overmatched.

Gavril is a sound technical boxer and expends little energy as his economical style allowed him to pick his opponent apart. As Mayweather Promotion’s CEO Leonard Ellerbe stated to Showtime “In this gym, Gavril is the only guy nobody wants to spar with”

Gavril has continued to get better; he has a vast amateur background with 180 fights and is a good pressure fighter who can cause damage wither either hand. Said trainer Eddie Mustafa Muhammad of Gavril’s opponents, “If you’re hurt, you’re gone”

SHO Box The New Generation’s tagline is: Before Greatness…Before Glory…You Have To Prove Yourself Here…Tomorrow’s Champions Today.  On Saturday’s card we saw three fighters answer that call, two expected and one unexpected, a highly touted prospect continued his rise, one returned to exercise his demons, and one that no one saw coming.

This article contributed to Behind The Gloves .com