Game On!!!! The much anticipated announcement of Floyd “Money” Mayweather (47-0 26 KO) and Manny “Pac Man” Pacquiao (57-5 38 KO) was made today by Mayweather himself via Shots App- 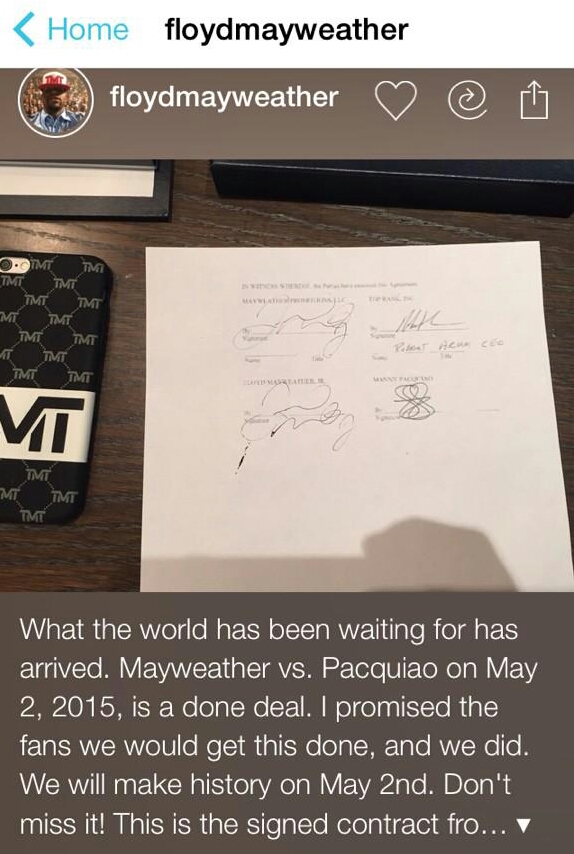 The unification bout on May 2 from the MGM Grand Garden Arena in Las Vegas, Nevada will be for the WBC, WBA, an WBO belts, but far more importantly the unofficial title of “Best Fighter Of Their Generation”.

The bout will be co-promoted by Mayweather Promotions and Top Rank Inc., and will be co-produced and distributed live by  both Showtime and HBO, PPV of course with the early rumors listing the buy at $100. There will be a few joint partnerships between Showtime and HBO here such as both ring announcers Jimmy Lennon Jr. (Showtime) and Michael Buffer (HBO) sharing the duties similarly as they did for the Mike Tyson Lennox Lewis bout.

Showtime and HBO on the mega bout- 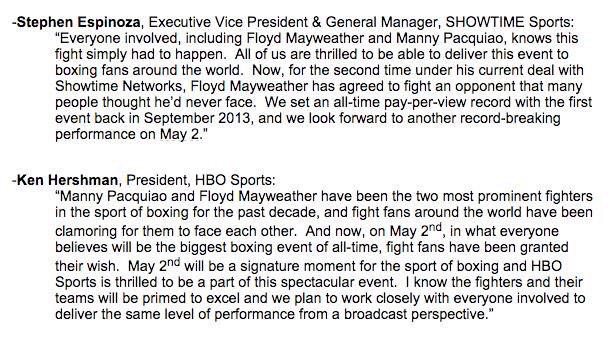 Both fighters released statements on the fight which will undoubtedly be the highest grossing fight ever.

“I am glad my decision to meet with Manny and discuss making this fight happen helped get the deal done,” said Mayweather. “Giving the fans what they want to see is always my main focus. This will be the biggest event in the history of the sport. Boxing fans and sports fans around the world will witness greatness on May 2. I am the best ever, TBE, and this fight will be another opportunity to showcase my skills and do what I do best, which is win. Manny is going to try to do what 47 before himfailed to do, but he won’t be successful. He will be number 48.”

“This is the right fight for boxing. Floyd Mayweather and I is the fight boxing fans have wanted for years and I am looking forward to it. I will be representing my fans and my country and trying to bring glory to the Philippines.” said Pacquiao.

There is no rematch clause and Mayweather will be the A-Side here on the contracted 60-40 split.

Years and years of will they or won’t they can now be put to rest. The two best fighters of the past decade will knuckleup for bragging rights not seen in the sweet science in some time. A defining exclamation point to solidify a career.

If the fight is anything like the build up of the past few years and more specifically like the past month, we are in for one hell of a night on May 2.