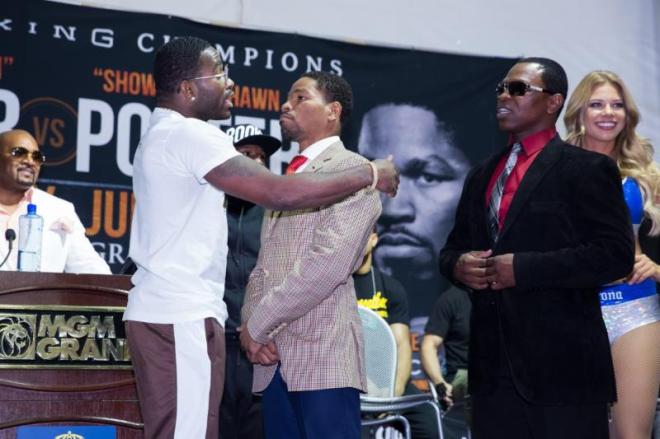 LAS VEGAS (June 18, 2015 – An animated Adrien “The Problem” Broner held court for several minutes Thursday, as a calm “Showtime” Shawn Porter delivered his own strong message in advance of the exciting weekend of Premier Boxing Champions action at MGM Grand.

Also in attendance on Thursday were rising stars from Mayweather Promotions who will be competing on both Saturday and Sunday.

Tickets for Saturday’s event are priced at $400, $300, $100 and $50 and tickets for Sunday’s event are priced at $100, $75, $50, and $25 not including applicable service charges and taxes are on sale now. To charge by phone with a major credit card for tickets to both events, call Ticketmaster at (800) 745-3000. Tickets for both events are also available at http://www.mgmgrand.com or http://www.ticketmaster.com. The weekend of action is promoted by Mayweather Promotions in association with TGB Promotions.

Here is what the press conference participants had to say:

“Mayweather Promotions has always done record-breaking numbers and our ultimate goal is to find the next Floyd Mayweather. With all of the talent out there, it will soon happen.

“I want all of the fighters out there to keep working hard, stay focused and know that there is no limit to what you can do.

“With all the media here talking to him, it’s obvious that Adrien is doing something right. He’s entertaining and people like it.

“There’s no limit to how far Adrien Broner can go in this sport. He can fight. I’m in the gym with him and he’s boxing top guys. He’s pushing himself.

“Shawn Porter is a really solid competitor. It’s not an easy task for Adrien, he’s going to have to fight.

“Mayweather Promotions wants to continue to work with all fighters and help build their careers so that they can get to that top level.”

“This is the AB show. You’re all getting it first, live and personal.

“Since both Shawn and his dad get a check, if I whoop both of them, will I get paid twice?

“I like Shawn as a person, but he gets so much negative energy from his dad. That’s just the truth”

“After I whoop you Shawn, come sign with About Billions and I’ll buy you a nicer car than your dad’s. I already wrote out the contract.

“This is going to be a great fight. I’m very excited because I love putting on a show for the fans. This boy will not beat me.

“I’m coming to deliver a beat down. Shawn Porter is a football player, I’m going to take him out. It’s going to be fun.”

“I’ve been working on everything in camp. I have a lot of speed, power, quickness and the whole nine. It’s going to take everything to win this fight.

“He’s got good speed, so we’re preparing for him to use a lot of that. We’ll make adjustments as we go along but the key is definitely taking care of his speed with our speed.

“It’s so sweet to be fighting at MGM Grand, this is what you want as a fighter. It’s my time now. I’m so excited about this opportunity.

“I just have to stay focused and put on a spectacular performance on Saturday night. Hopefully next time I’ll be the main event. It’s a process but I’m getting there.

“Porter and Broner are a little more seasoned that me, but skill wise I think I’m right on par with them. Skill for skill I can match anybody in boxing.

“A lot of guys aren’t in the position that I’m in to get the opportunities that I have. This is my third year as a pro and it’s all been coming pretty fast. It’s all about timing. I’m enjoying the process.

“You’re going to be looking at the future of the sport come Saturday night.”

“There’s no such thing as the right moment. The perfect fight is when you want it to be. I got the call and decided that this is the perfect timing.

“It took me about 30 seconds to decide to take this fight. When you know why you fight, it makes these decisions easy.

“A year ago there was no way I thought I’d be on this stage. Now I have real opportunities and we’re here now.

“Win, lose or draw, I’m going back to the gym next week.

“I’m a pressure fighter. I like to engage and give the fans what they want to see. This is a great opportunity. Saturday is going to be fun.”

“I’m feeling good moving up in weight. Everybody knows Antonio DeMarco is a very, very tough fighter. He’s one of the best I’ve ever fought. His record who he has faced proves that. He’s experienced, but so am I.

“I want to be the best Cuban fighter of all-time and I’m on my way.

“I’m in tremendous shape and I’m ready to go. I want to showcase my skills on Sunday to show the world how I can fight.

“Who do I want to fight? I’ll fight anyone they put in my way. I’ll fight Godzilla if he’s there.

“I don’t do predictions but this is going to be an entertaining fight. Unlike past Cuban fighters, I have power and can knock people out. In the amateurs you don’t need power. But in the pros, that’s what it’s all about.”

“This is going to be a tough fight, a difficult fight, but I have a great responsibility. My 15-year-old sister told me that if I win, she will beat cancer. She was diagnosed with bone cancer last November – and it was life-threatening. But her last chemo treatment was yesterday.

“From a ring standpoint, I am really looking forward to Sunday. I am very prepared, I am relaxed and ready to go. Besides for my sister, my other main motivation is that this is a chance to get my career back on track. A victory and I can get back to where I was and in position to challenge the best.

“I am treating it like another fight, but of course it is much more. Exposure-wise, you can’t get better than network television.

“I know Rances is going to be a difficult opponent. He’s a great fighter. But I have the experience to come up with a game plan to win. From a career-standpoint, this is a very important fight and I’m ready for it.”

“It’s an honor to be here in this building among some of the greatest fighters in the world. Omotoso has never fought anyone like me before.

“Omotoso is tough. His record speaks for itself at 25-1. His only loss was to Jessie Vargas who’s fighting for a world title. I don’t take anybody lightly. I’ve trained hard for this and I don’t think he’s fought anyone as fast as me or hits as hard as me with both hands.

“I’m going to throw a lot of punches and it should be fun to see. It will be an entertaining fight. The main goal is to win. If the opportunity presents itself to knock him out then I will. I’m not going to go in there trying to knock his head off or anything. I have to box smart.

“In this game it’s all about longevity and the less you get hit the longer you can fight so I don’t want to get hit. That’s my goal.”

“I feel blessed to have the opportunity to fight on such a big stage. Fighting on network TV provides all of us such a lift. Getting this kind of national exposure is what fighters like me need and what we work so hard to get.

“I’m totally ready to take advantage and I look forward to being able to showcase my talents on Sunday. All my friends and countrymen are going to be able to watch it, and I don’t want to let them down.

“I really don’t know much about Vasquez, other than he’s a southpaw whose quick, he is just another fighter who can fight. But we can all fight. It’s not like he has four hands and two heads.

“The best man will be victorious and I am confident that is me.

“I can’t wait for Sunday. I wish it was time to fight right now. This is going to be my Father’s Day present to my kids and wife.”