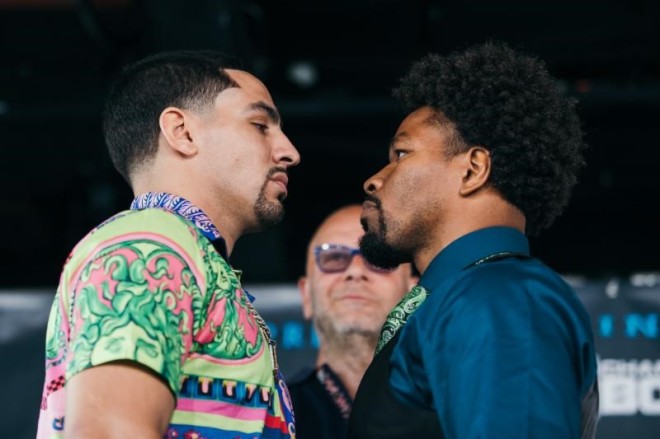 “I will show the world once again why I am one of the best
in this sport,” – Garcia

“Winning a title is always special, but beating Danny Garcia will be
icing on the cake,” – Porter

The SHOWTIME CHAMPIONSHIP BOXING® main event (9 p.m. ET/6 p.m. PT) will pit two of the division’s biggest names against each other in a marquee showdown of elite welterweights.

Tickets for the live event, which is promoted by TGB Promotions and DiBella Entertainment, in association with DSG Promotions, start at $50 and are on sale now. Tickets can be purchased at ticketmaster.com, barclayscenter.com, or by calling 800-745-3000. Tickets can also be purchased at the American Express Box Office at Barclays Center. Group discounts are available by calling 844-BKLYN-GP

Here is what the press conference participants had to say Monday from the Dream Hotel Downtown in Manhattan:

“I’m excited for this fight because I’m a world championship-level fighter and this gives me the chance to be back where I’ve been for so long. It doesn’t matter who it is, I’m just happy to be back and fighting for the title.

“The loss against Keith Thurman hurt me for a little bit. I thought I finished the fight strong and won. At the end of the day though, I feel motivated again. I feel more motivated now than I did before the fight. There’s something different inside of me.

“There’s no pressure on me, I’m just going to come to fight. We can dance if he wants, but I guarantee I’m coming to bang with him in the middle of the ring. I feel I’m the stronger puncher, have the faster hands and and am the better all-around fighter.

“I’m so used to hearing my dad’s voice during a fight. Me and my dad are different than other people. We do a lot together outside of the ring. We’re friends first because of where we came from. We’re enjoying every moment and we’re hungry for me.

“At the end of the day, my mindset is fully focused on September 8. I have to go grab this title and then you can ask me to fight anyone. I’ve never turned down an opponent in my career. I’m a fighter and this is what I do.

“This wasn’t the first time someone has called me out and it won’t be the last. Come September 8, I will show the world once again why I am one of the best.

“At the end of the day, I have to go in there and make adjustments and do what I do best. I’ll set the tempo and the pace and take it one round at a time.

“The fans at Barclays Center love me. This is the ‘Danny Garcia Show.’ Whenever I fight here, all I hear is ‘DSG! DSG!.’ They are going to be there for me.”

“I think for a long time, watching Danny do what he does and hearing him say what he’d do to me, I got stirred up to the point where I really wanted this fight. I made that known after his fight against Brandon Rios and I think that’s why we’re here right now.

“This is a great opportunity to get the fight I wanted for my career. I’m thriving right now and you’ll see it all on fight night.

“I’m a very difficult fighter to prepare for. You never know what you’ll get with me. I’m used to being the underdog and I thrive on it. I’m the more intelligent fighter at the end of the day.

“Me and my dad are a little different than Angel and Danny. Boxing is our way of life and this is what he’s grown me into. Fight night is like Christmas or another birthday. That’s when we come together the most and make the best of every opportunity.

“All of my abilities – power, quickness, the whole nine will help me get this victory. To beat Danny Garcia, you have to use your whole arsenal. Especially beating him in the fashion we want to beat him in. We want to look great.

“We have seen Danny in the ring with different fighters with different styles. You can be aggressive and beat him, you can use the ring and outbox him, we are going to use them all.

“At the end of the day, I learned a lesson in my last fight. My dad told me not to do anything for the crowd. You have to do what you have to do to win. September 8 isn’t going to be about making the crowd yell and winning them over. That is already done. It is a matter of going in there with whatever game plan we go with and making it happen.

“The belt is all I want. Winning a title is always special, but beating Danny Garcia for it will be icing on the cake. He’s been a top fighter for a long time and this win will help solidify me. Once I have the belt, the sky’s the limit.”

“I don’t see anything special in Shawn Porter. He comes with his head, he comes wild. We’re going to take care of him and we’re going to work on him. He’s not bringing anything to the table that I haven’t seen before. It’s Danny’s time.

“At the end of the day we got a fight. Words are just words. I’d give my life for Danny. I’d take a bullet for him, I love him.

“Listen, when Danny hits him on the right side he’s going to feel it on the left. My son’s power is like nothing he’s ever seen before.

“Listen, at the end of the night September 8th, Danny will be champion again. That belt is coming home with us and back to Philadelphia.”

“We really enjoy fighting at Barclays Center. The energy there is different than any other location. It is a comfortable location for us and it is going to be an exciting night.

“Training has been different in a lot of ways, but a very good different. We are doing a lot of things that we have never done before and we are excited about that. To do different things that create excitement and make you look forward to coming to train is always good.

“They will not be prepared for us on fight night. We will start to focus on some of the things that we will do for Danny and in that aspect, there are some things we will have to prepare for differently.

“Shawn has come out on the short end a couple of times, and clearly those fights could have been scored differently. They were sensational fights as all of his bouts tend to be.

“Danny Garcia doesn’t get enough respect, he gets out there and wins. He’s a great fighter who does everything well, which makes him extremely dangerous.

“These guys have earned this opportunity and the winner deserves the belt. The winner will get one of the biggest fights in the sport after this. Both guys are professionals who know the stakes on September 8.

“This is going to be an electric fight. The fans will be on the edge of their seats this whole night and you’re not going to want to miss it.

“These are two guys who know how to fight and will entertain you. Make sure you get your tickets early.”

“As Lou said September 8th should be terrific. I am personally looking forward to it. It adds to our resume of BROOKLYN BOXING. It comes almost right at our 6th anniversary of Barclays Center.

“Both fighters are veterans in our ring. This is Danny’s seventh fight in Brooklyn and Shaw’s fifth and they have built fan bases here. Our presale in the first few days have been terrific.

“Shawn’s last three fights have been in Brooklyn. I think you and your dad have been sitting ringside for every fight in Brooklyn and we are thrilled to have you back.

“We are thankful to be hosting the boxing industry time and time again and we are as committed as ever to bring the best of the best to Brooklyn and doing it consistently throughout the year. I look forward to seeing everyone on the 8th. It should be a spectacular night.”

“Garcia vs. Porter will be the 12th SHOWTIME CHAMPIONSHIP BOXING event of the year. That is just through September. Adding our other live boxing events, we have done 24 live boxing presentations this year. It is not just quantity; it is high quality.

“Eight times on SHOWTIME this year alone, there have been top five fighters fighting each other. Here we have two of the strongest resumes not just in the welterweight division, but in the sport overall.

“Between the two of them, they have fought on SHOWTIME and/or CBS combined 20 times. The best fighters, the biggest most meaningful fights. That’s what we have been doing, and with fighters like Danny and Shawn, we are going to continue to do it.”