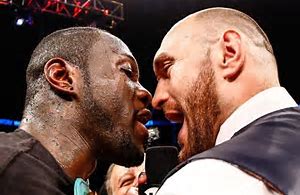 THE CONTRACTS ARE SIGNED & THE FIGHT IS ON!

The contracts have been signed and the promotional tour will kickoff in London on Oct. 1 and continue with stops in New York City and Los Angeles.

More details on the location, venue and the on-sale ticket information for the heavyweight championship battle will be released next week.