LOS ANGELES (January 13) – The challenger proved to be the aggressor as Caleb Plant became the IBF Super Middleweight World Champion, defeating Jose Uzcategui in the main event of the first Premier Boxing Champions on FS1 and FOX Deportes event of 2019, which took place at the Microsoft Theater at L.A. Live in Los Angeles. Plant dominated the whole fight as he maintained a fast and aggressive pace from the opening bell.

With scores of 116-110 twice and 115-111 in favor of Plant, the freshly crowned champion, Plant fell to his knees overcome with emotion when he heard “and the new!”.

“I’ve worked my whole entire life for this,” said Plant. “I buried my daughter in the process of trying to get this belt. I promised I would bring her this title and that is what I am going to do.”

The super middleweight barnburner started out strong with both combatants throwing exchanges, but Plant did everything in his power to never back down. Uzcategui threw hard right hands to start the second round, but Plant quickly turned the round in his favor as he knocked Uzcategui to the canvas with a flurry of punches, only the third time Uzcategui had been knocked down in his career. A small cut opened under the left eye of Uzcategui to start the third, but he fought through it and fended off Plant’s aggression. One minute into the fourth round, a cut opened up under Plant’s right eye causing blood to stream. That did not stop the Nashville native as threw a hard left hook that once again sent Uzcategui to the canvas. 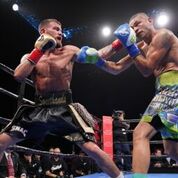 As the fight progressed, the Venezuelan was unable to utilize his distance, thus allowing Plant to fight on the inside. Despite good exchanges in the seventh and eighth, it became increasingly clear that Uzcategui would need a knockout to hold onto his belt. Uzcategui flipped a switch in the championship rounds and came forward, throwing hard blows to the body and head of Plant. But it was too little too late for Uzcategui as Plant’s ring generalship controlled the pace of the fight, ultimately ending in a unanimous decision.

“I knew I caught him clean [when I knocked down Uzcategui], but I knew he wasn’t all the way out so I took my time,” continued Plant. “I stayed relaxed. I stuck to the game plan and got it done just like I said I would.

“This is overwhelming. I am a kid who came from nothing. I believed in myself and now I’ve been crowned king. Right now, I am not thinking ahead. I just want to embrace this moment and soak it in.”

“I did feel that I had the advantage heading into the fight,” said Uzcategui. “I went down because I was off balance, but I wasn’t hurt. He started to get tired around the sixth round, which was the plan. Caleb knew how to clench and hold. He was smart. He knew how to stay away from the punches.

“I expected more movement and more boxing out of him,” continued Uzcategui. “I would love the rematch. I think everyone saw a great fight tonight. I gave him the chance at the title and I would hope he would give me the chance to win it back.”

Unbeaten Brandon Figueroa (18-0, 13 KOs) of Weslaco, Texas faced former world title challenger Moises Flores (25-2, 17 KOs) of Guadalajara, Mex. in a WBA Super Bantamweight title eliminator. Figueroa wasted no time attacking Flores in round one as he came forward and threw several hard lefts followed by a body shot that seemed to surprise Flores. With 30 seconds left in the round, Figueroa went for the body and worked Flores on the inside. While Flores seemed to find his footing at the start of round three, Figueroa unleashed a flurry of punches that sent Flores to the canvas once and then a second time that ended the fight at 1:35 of the third round.

“Break him down and finish him,” said Figueroa “This is exactly how I expected it to go. I knew that he wasn’t going to handle those body shots. My message to Daniel Roman is that I am going to go home and prepare.

“I used that body work,” continued Figueroa. “I am really strong. I came in at 110 percent and did my job. I could have done better. I am really hard on myself. I know there are things I can continue to work on and will do that as soon as I get home. I am most definitely ready for a title shot.”

Fast-rising undefeated star and PBC Prospect of 2018 Joey Spencer (6-0, 6 KOs) of Linden, Mich., continued his impressive knockout streak as he defeated Brandon Harder (2-2, 1 KO) of Southaven, Miss., in a super welterweight contest that saw Spencer knocking down Harder three times in less than two rounds. The 18-year-old Spencer, who fought 100 fights as an amateur, established his jab early and landed at will. He threw and landed a straight right at the end of round one that sent Harder to his knees. Forty-five seconds into round two, Spencer sent Harder to the canvas again followed by a swarm of punches that ended the fight at 1:27 of the round.

“Fans are going to see that I give it my all when I get in the ring and I’m going to put on a show,” said Spencer. “You’re going to get more and more tests in my career and I believe I will rise to the level of my competition. Sometimes you’re in there with an awkward guy, he proves to be a test. I’ll move to six rounds for my next fight. I want to fight four times this year and I’m looking forward to it.”

The Premier Boxing Champions Prelims on FS1 featured three bouts that all ended in exciting knockout victories, kicking off a great night of fights.

The Prelim telecast featured the long-awaited ring return of Guillermo Rigondeux (18-1, 12 KOs) who hadn’t fought since December 2017. The Cuban fan-favorite faced Giovanni Delgado of Tacubaya, Mex. (16-9, 9 KOs) and knocked him out in the last second of round one with an overhand left. Delgado could not be saved by the 10 count and the fight was called in favor of Rigondeux.

“This is my division. This is my time,” said Rigondeaux. “I am the king of 122 pounds. I felt 100 percent. Delgado is a good fighter. I take my hat off to him and his team. I came prepared and I am ready to face people that are undefeated. Whoever has a belt, I am taking it. You can expect me back in less than two months.” 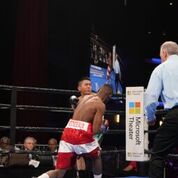 “I fought my idol tonight,” said Delgado. “I knew he hit hard, but I didn’t know he hit that hard. I have been cleared by the doctor and am fine. Just a little bit in shock.”

A scheduled eight-round light heavyweight bout featuring Egypt’s Ahmed Elbiali (18-1, 15 KOs) against 16-year veteran Allan Green (33-6, 22 KOs) of Tulsa, OK saw Elbiali knock Green down in every round. However, Green did showcase his experience choosing to go toe-to-toe despite Elbiali’s aggression. Ultimately, it was a right uppercut followed by an overhand right that sent Green to the canvas as Elbiali scored a knockout at 1:16 of round three.

“I was easier than I thought it was going to be,” said Elbiali. “Losing to Pascal the way I did, it messes with you mentally. I was trying to stay on my A-game. Stay focused and thankfully it showed. My game plan clicked really well. I have been sparring with Caleb (Plant) and other great guys. That keeps you sharp and alert. I would love to win a world title and be the first Egyptian win a world championship.”

In the opening bout of the Premier Boxing Champions Prelims on FS1, Mexican Olympian Lindolfo Delgado (8-0, 8 KOs) of Linares, Mex. continued his professional knockout streak as he defeated Sergio Lopez (22-13-1, 15 KOs) of West Covina, CA via knockout at 2:48 of the third round. Delgado has yet to fight 30 rounds in his eight fights as a professional. He was clearly the aggressor throughout the fight and landed almost 50 percent of his power punches.