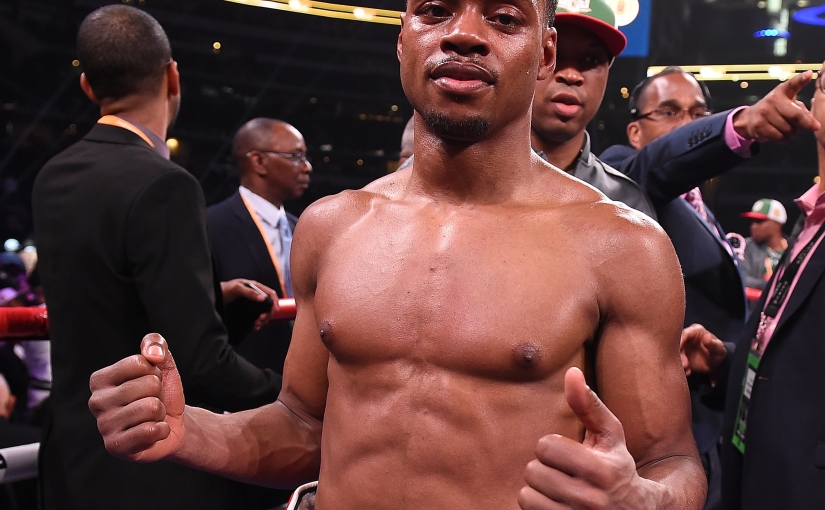 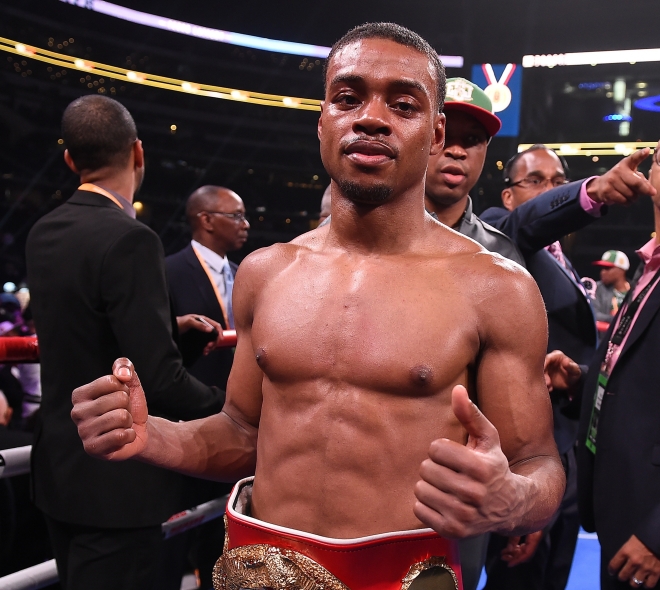 “The motivation fighting in front of my hometown crowd made me feel great,” said Spence. “These people have supported me since day one and I wanted to put on a good performance for all of them.”

“I really appreciate the love and support of the fans tonight,” said Garcia. “It’s a great night and all the credit to Errol, he’s a great champion. He’s the truth. He executed his game plan very well.”

The bout started technical, with Spence pumping a consistent jab and attempting to cut the ring off while Garcia was patiently looking for a chance to counter. Garcia had some success early throwing counter left hooks over Spence’s jab, but was never able to get in a rhythm against the busier champion. 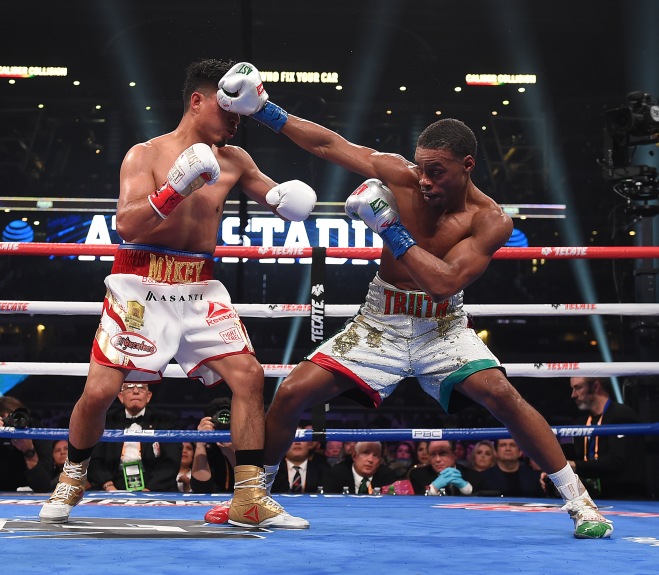 “He came out here with a good game plan and kept the distance at his favor,” said Garcia. “I couldn’t get my rhythm going and he did what he had to do. I tried to make adjustments and he kept executing.” 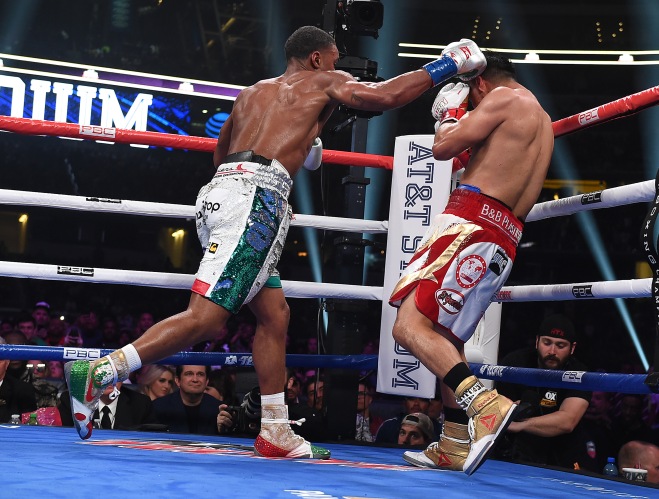 In round four, Spence dominated most of the action before Garcia made a late surge and forced Spence into a defensive crouch for the final moments of the round. Garcia kept that energy going early in round five, putting Spence on the defensive temporarily before he regained his momentum and returned to connecting on powerful straight lefts.

Spence increased his body-punching as the fight went on and looked to wear down the fighter who was moving up in weight. Garcia began bleeding from his nose in round eight, at which point Spence increased his output and landed 35, 29, 34 and 25 punches in rounds nine through 12 respectively, according to CompuBox. 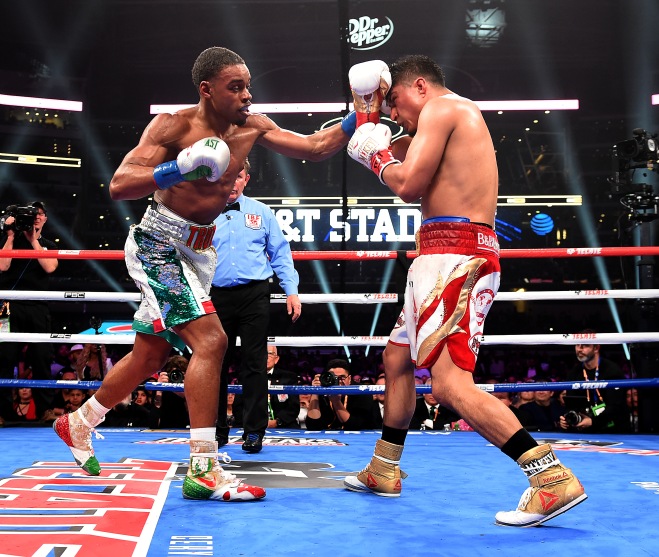 “Throughout training camp, a lot of commentators thought he was too smart and I couldn’t box as well as him,” said Spence. “I showed I can box and I can move my head if I want to. The game is to be smart, it’s the sweet science. I had the size and reach advantage, so why not use it to take away the jab? It’s a weapon for me and it takes away one of his weapons.”

“I was able to hold my own,” said Garcia. “I felt good and I felt strong myself. I think he felt my power, but he definitely has power also.”

While Garcia showed his mettle in making it the distance, Spence was simply too effective, with one judge even scoring round 11 10-8 for Spence. Spence threw a career-high 1082 punches and out landed Garcia by a staggering 345 to 75 margin.

“I give Mikey Garcia all the credit for taking this fight,” said Spence. “Mikey and I put on a great show in front of all these lovely fans. I respect him so much and I appreciate him for stepping up.”

“We just went 12-rounds with a great welterweight champion,” said Garcia. “That’s a feat no one has done recently. I’m proud of what I was able to do. I have to go back and think about it. I will probably go back to lighter divisions but we’ll have to think about it.”

After the fight, Spence declared that he wanted to fight boxing legend and welterweight titleholder Manny Pacquiao next, who entered the ring after the fight.

“He’s broken records here before, he’s a legend in the sport and it’d be my honor to fight him next,” said Spence.

“Yes, why not?” said Pacquiao, when asked about facing Spence next. “We’ll give the fans a good fight. I’m so happy to be here at AT&T Stadium and I hope I will be back here soon.” 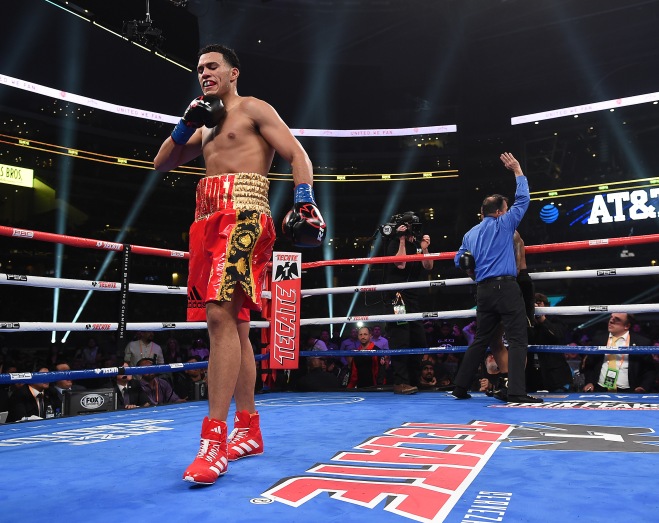 “It’s a dream come true to fight on this stage in front of these fans,” said Benavidez. “These fans give me the motivation to get up every day and go the extra mile.”

From the opening bell Love sought to crowd the taller Benavidez, but the 22-year-old Benavidez quickly made him pay, landing a powerful left hook that stunned Love. Love was able to last the round, but took more powerful hooks from Benavidez before the bell.

“I expected to knock him out, but when I hit him with the first god shot, I knew he wasn’t going to last,” said Benavidez. “I tried to pace myself, but it wasn’t necessary tonight.” 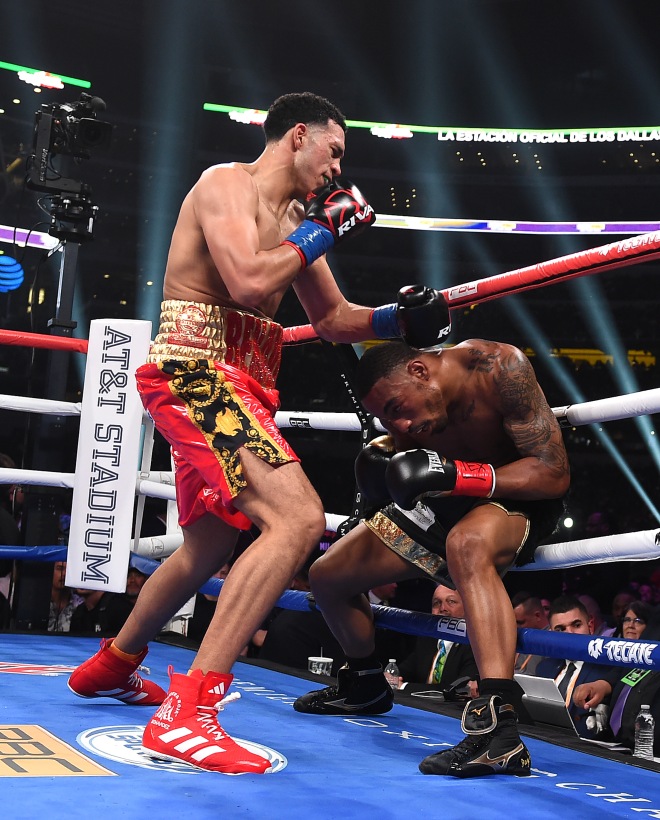 Benavidez wasted little time in the second round, delivering power shots that put Love on the run. Benavidez caught Love with a clean combo on the ropes that stunned Love and forced referee Laurence Cole to jump in and stop the bout 1:14 into round two, as Benavidez began to throw furious combos.

“He was getting his shots off, but I don’t think I was taking too much punishment,” said Love. “I wasn’t out of the game completely but he did catch me with a couple good shots.”

After the bout, Benavidez set his sights on WBC Super Middleweight Champion Anthony Dirrell, who was in attendance at the fight.

“I saw Anthony Dirrell with the WBC belt. He can’t call himself champion until he fights me. That’s my belt. I’m going to go get it. It’s mine.” 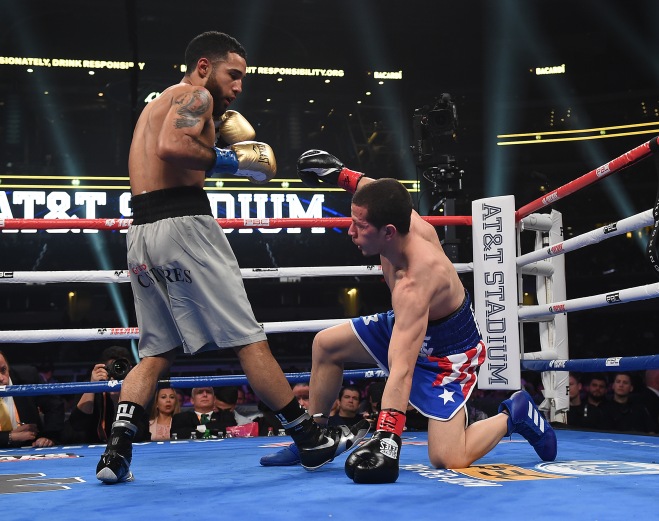 “We’re two great fighters who were here to put on a show,” said Nery. “That’s what you have to expect from fighters of our caliber. I’m happy to start on the right foot here in my U.S. debut and show everyone I’m still the best at bantamweight.”

Nery stalked Arroyo from the opening bell, throwing big power shots that forced his opponent to fight off his back foot. With 45 seconds left in round two, Nery scored his first knockdown with a left that stunned him and follow-up combination that put Arroyo on the canvas.

Arroyo was unable to keep the hard-charging Nery from coming forward and again hit the mat late in round three, as a wide left hook hurt Arroyo before he was put down from a flurry that followed. The trouble continued for Arroyo in round four, as he was knocked down twice more in the final minute of the round.

“I never felt like I was dazed or anything, they were just hard punches,” said Arroyo. “I went down but got right back up. If it were up to me I’d have kept going. I have to give respect to my opponent for his performance. This isn’t the end of my career. I’ve seen him fight before but I was surprised by his power. It was his night tonight.”

After the fourth round, Arroyo’s corner stopped the bout, making the official stoppage 10 seconds into round five. Nery dominated the bout, out landing Arroyo 87 to 36, while landing 44 percent of his power punches.

“We’re going to train hard and hopefully by June, we’ll have the belt back,” said Nery. “I want to win back my belt, then unify the division.”

“Augustin is a hungry kid who tried to make a name off of me,” said Arreola. “I lose and I’m out, but I’m not going out. I touched him a couple of times and saw he was hurt. I stayed calm and the stoppage came.”

After blood started pouring from Arreola’s nose towards the end of round two, the Riverside, California-native got off to a quick start in round three, connecting with a straight left that stunned Augustin and nearly sent him to the canvas in the opening seconds. 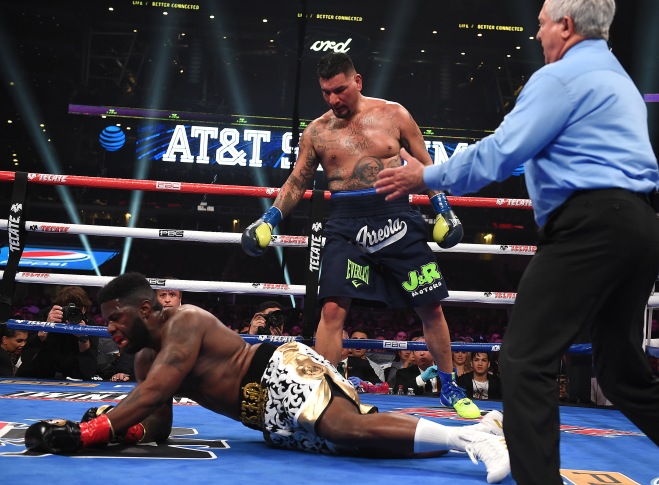 As the round progressed, Augustin tried to hold and move to regain his composure, but was eventually caught with a flurry in the neutral corner that put him on the canvas. While he got up and was able to continue, another flurry in Augustin’s corner, including a big overhand left, eventually forced referee Neal Young to stop the fight 2:03 into round three.

“Every fighter feels like they can continue, but it is what it is, it’s out of my control,” said Augustin. “I was more stunned than hurt, but he jumped on me and finished.”

In the dominant final round Arreola landed 18 of 30 power punches, compared to just three punches landed in the round by Augustin.

“I love fighting,” said Arreola. “We’re both were trying to beat each other up and I love it. I’m blessed to be a fighter.”

Preceding the pay-per-view, PBC Prelims on FS1 featured former heavyweight champion Charles Martin (26-2-1. 23 KOs) winning via disqualification against previously unbeaten Gregory Corbin (15-1, 9 KOs) in the eighth-round of their showdown. After deducting a point from Corbin in rounds four, five and six because of low blows, referee Mark Calo-oy stopped the bout in round eight after another low blow. The official time of the disqualification came 53 seconds into round eight. 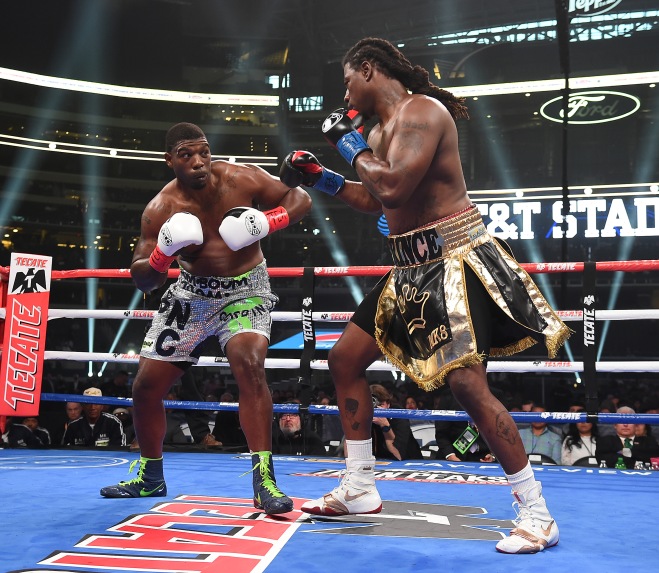 “I don’t think he really wanted to fight, he wanted to hit me low and see how much he could get away with,” said Martin. “I could sense that he didn’t want to engage anymore.”

“It is what it is, I thought I was hitting him on the belt,” said Corbin. “We wanted to go to the body, I thought he was tired. I hurt him once, but the low blows did it for me.”