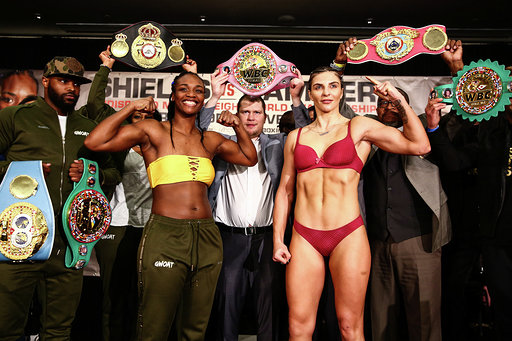 Live at 9:10 p.m. ET/PT from Boardwalk Hall in Atlantic City 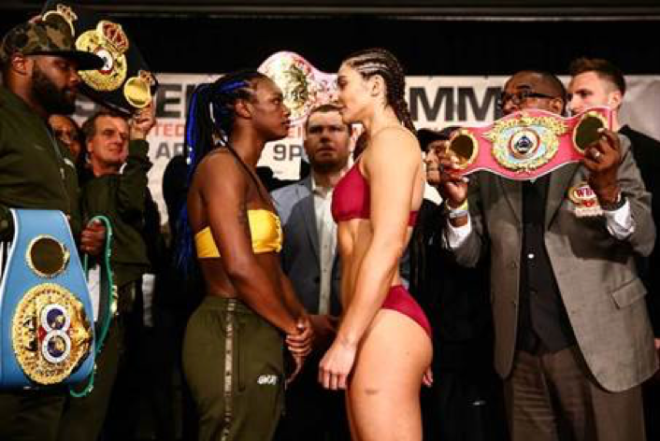 ATLANTIC CITY(April 12, 2019) – Undefeated middleweight champions Claressa Shields and Christina Hammer went face-to-face one final time during a tension-filled official weigh-in for the most significant event in women’s boxing history. Both fighters made weight as the two champions aim to become the undisputed middleweight champion tomorrow in the main event of SHOWTIME BOXING: SPECIAL EDITION live on SHOWTIME (9:10 p.m. ET/PT) from Boardwalk Hall in Atlantic City, N.J.

Top American heavyweight prospect Jermaine Franklin will take on former No. 1-ranked U.S. amateur Rydell Booker in the 10-round co-featured bout while undefeated Swedish heavyweight Otto Wallin will battle highly decorated amateur Nick Kisner in a 10-round clash that will open the tripleheader.

Tickets for the live event, which is promoted by Salita Promotions, are priced at $150, $100, $55 and $35 and can be purchased through Ticketmaster and at boardwalkhall.com.

“I’m very relaxed. When I feel this relaxed, I know it’s going to be a good fight. I don’t even feel like there’s a fight; I feel very calm and I always fight better when I feel this way. I’ve checked all the boxes for this fight. The conditioning, the nutrition, the training, everything. I am entirely focused on the fight.

“I’ve played this fight in my head many times. The first round is a very important round. She’ll find out just how strong I am in the first round and I’m going to let her know she’s in with a fighter. I’m going to let her know she won’t control this fight in any aspect. I can outbox Hammer. I’m way faster and I have great head movement. I came to fight. I want to see where her heart is and how strong she is. If she’s not as strong as she says she is, she’s going to want to get out of there. 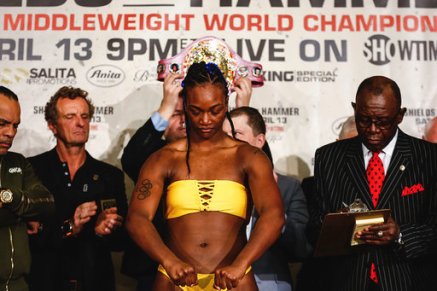 “Every time I box, I feel like I need to go out there and perform so that women’s boxing isn’t in the position we’re in now. I want the little girls coming up not to have to go through what I’ve gone through in terms of equal pay and trying to get on TV. I was able to box my way up to get here and it shouldn’t be as hard for other women to do the same. This fight is bigger than me.”

“I’ve worked really hard for this. I’ve sacrificed everything for this fight and it’s time to show who’s the real champion and who Christina Hammer is. I feel like I’m the stronger one, mentally. I showed her at the stare down that I’m not scared. Every fight, there’s a mental battle and I think I won the mental battle for this fight.

“I have to stick to my game plan and not worry about hers. Shields is beatable. Hanna Gabriels showed that. I have to make her pay for every mistake. We’ve analyzed her a lot and I’ve known for a long time that I would one day fight her. 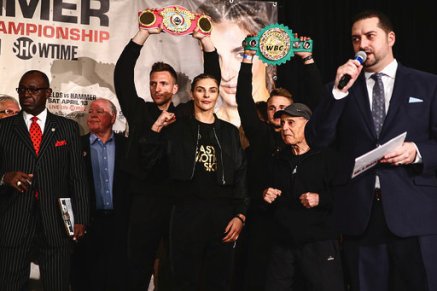 “I’m not scared of her one bit. Why would I be scared of her? I worked really hard for this opportunity and now it’s the point where I have to show it. I have to focus in every single round. This will be a tough fight and I know my opponent also wants to win but on Saturday night, I will be the undisputed champion of the world.

“I hope that a lot of women will be inspired by this fight. I want women to know that if they work hard, they can make it to whatever level they aspire to be in whatever sport it is they do.”

“I always study my opponents and watch tape. I see a guy in Booker that likes to slow the pace and try to control the distance. I’m very active. I call myself a boxer-puncher, and I adjust my game plan depending on my opponent. I will capitalize on his weaknesses.

“I want to fight the best. That’s a mindset that I’ll always have, but I understand how boxing works and I might have to wait for my time. It’s a great time to be a heavyweight and I feel like it will be my time soon.

“I’m going to take him to the deep waters, and he may not be able to survive once I take him there.” 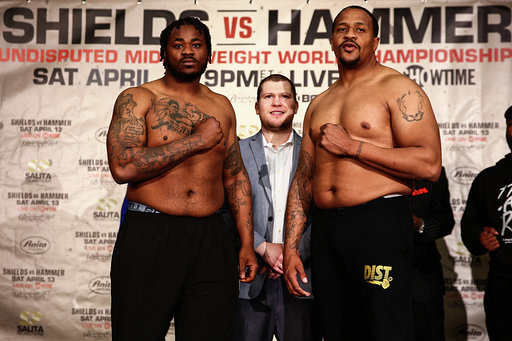 “I’ve been boxing since I was seven years old. I’ve always had a passion for boxing and while I was away, I took care of my body and I always knew I wanted to fight again. I was able to do a little bit of training and did the best I could, but being in prison definitely wasn’t conducive to being a boxer.

“I have a gift that a lot of fighters don’t have. I have a good jab. I have the ability to be an effective counter-puncher and I can fight when I need to. Jermaine Franklin has never been in with somebody with the talent and experience that I have. I’m a better fighter than I was 15 years ago because I’m smarter and stronger mentally. My skills have not deteriorated at all and my body has been preserved.”

“I’ve been in New York for three years with Joey [Gamache]. I’m used to the training. To be fighting on such a big card, there’s a lot more press than I’m used to. There’s been a lot of interviews and press conferences and I can feel that this is a big event.

“Sweden needs a boxing superstar that stands out, and I want to be that person. I see good fighters in the heavyweight division. The top three fighters are really good. I want to take care of Saturday night, fight a couple more times this year and then next year I will be ready for a step-up in competition.”

“I sought this fight. I asked for it. Wallin is good but I really like to challenge myself. I think he’s one of the best heavyweights out there. This is a great opportunity. I think it’s going to be a challenge but at the same time I think I can win this fight. It doesn’t get much bigger of an opportunity than to fight live on SHOWTIME.”