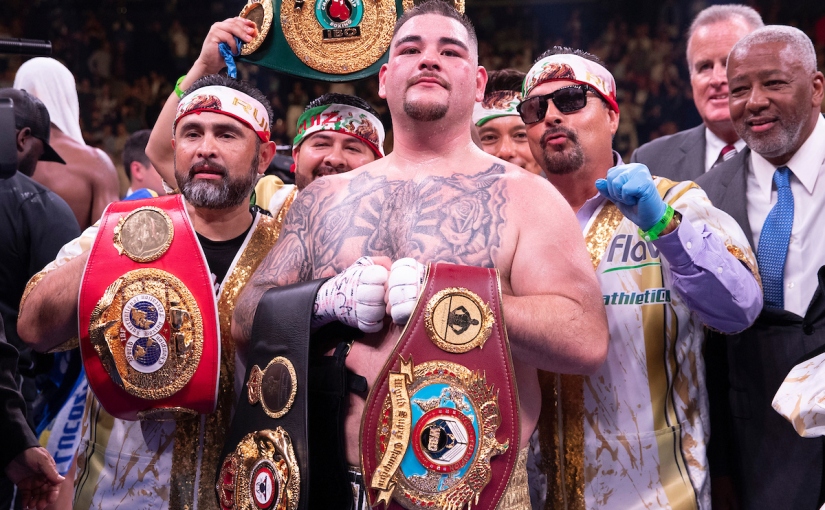 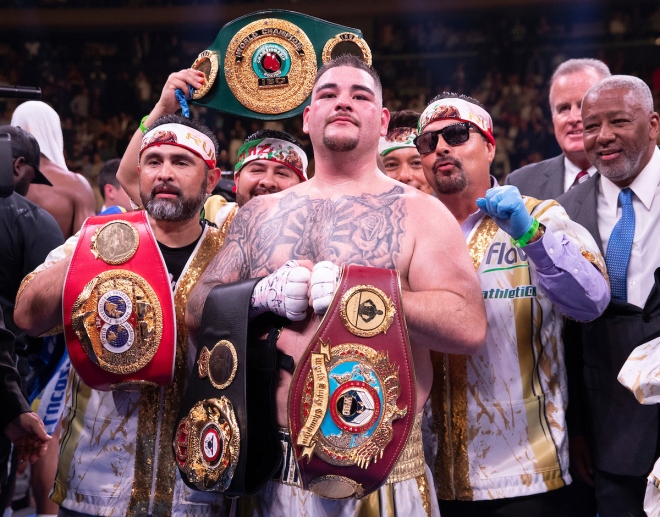 Andy Ruiz Jr produced one of the biggest shocks in the history of Heavyweight boxing to rip Anthony Joshua’s IBF, WBA, WBO and IBO World titles from him in a remarkable night at Madison Square Garden in New York.

Ruiz floored Joshua four times en route to a seventh round TKO win that saw him become the first ever Heavyweight champion of Mexican descent, which stunned a sold out crowd of 20,201 at the iconic venue and handed the Brit his first defeat as a pro.

On the fight: “Heavyweight boxing baby, thank you to the people who came out this evening. That’s number one. Thank you to DAZN, Sky Sports, Andy Ruiz. Heavyweight boxing is on fire. I just have to turn it around a few notches and bring it back my way. I don’t want people to drown in their sorrows. This will show I have the power and the strength.”

On the difference between tonight and Wladimir Klitschko: “It’s all the same. It just wasn’t my night. But listen, it is good for the TV. Good for DAZN and the people watching.”

On the stoppage: “I want to fight. I don’t do his job. I am never one of those fighters to disrespect a referee like he should have done this or he should have done that. He called it off when he thought I couldn’t fight. It’s a shame. But I don’t want anyone to drown in their sorrows. It’s the long game, not the short game.”

On taking Anthony Joshua’s power: “It’s because of the Mexican warrior I am, I have that Mexican blood in me. Talking about the Mexican fighting style, I just proved it.”

On a rematch clause: “Of course man, right now, I just want to celebrate. I just made history for Mexico. This is what I have been dreaming about since I was six years old.”

Smith scored a knockdown with a big left hook in the opening round, another left hook in round two and a right in the third finished the fight.

On his performance: “It felt good to be back in there. I took a few months longer than most new champions to get back in there but I showed that I am the best in the world. I plan to keep proving that over the next few years. I hope the fans enjoyed it and I hope to be back in the ring soon with bigger and better things.”

On his sparring with N’Dam helping t§onight: “Not really, but I didn’t have to watch quite as much film on him. He is a good fighter and he has good movement. I knew if I was patient that I would get rid of him. It’s an honor to fight at Madison Square Garden, an iconic venue, to make my first title defense.”

On wanting to put on a show: “I said that in the build up – and it’s no disrespect to Hassan N’Dam – but this was a fight I was expected to win so anything less than a great performance people would take notice. I knew that a fan friendly, spectacular win would though. I knew it would get people talking about me. It was always about the performance just as much as the win.”

On Canelo Alvarez: “I think my audition went well. Canelo is a special fighter. I will have to wait to see what he will do in September or if not September than see what he wants to do in May. He hasn’t said he is moving up to 168 yet but I believe I am the best fighter in the world at 168 so I am open to the challenge. But I don’t want to keep waiting for the fight that might never happen, I want to keep fighting great champions in the meantime and stay busy. There’s a lot of good fighters at 168 with or without Canelo so I want to text myself against them. If Canelo steps up in the future than it will happen.”

Katie Taylor created history by becoming the undisputed Women’s Lightweight Champion of the World with a thrilling points win over Belgium’s Delfine Persoon.

Taylor came under relentless pressure from Persoon throughout the ten rounds that gripped the New York crowd. The Irish favourite looked exhausted in the final round but held on to earn a majority points win of 95-95 96-94 96-94.

On the close decision: “It was a very, very close fight. I felt like I won the earlier rounds and she came on strong at the end. But I feel like I did enough to win that fight. But it was very, very close and I knew it was going to be that kind of fight. Persoon was a fantastic champion and she is very, very strong. It all made for a fantastic showcase for women’s boxing. I knew this was going to be the biggest and hardest fight of my life. But I am great at digging deep. I am born for fights like these in the trenches. I worked so hard these past few months in training camp for this kind of fight. My coach is the mastermind behind this and I am so grateful.”

On listening to her corner: “That’s my problem sometimes. I like a fight a bit too much sometimes. I probably should’ve fought on the outside a bit more sometimes. But then I just needed to dig deep and get that win.”

On a rematch: “I am definitely happy to give Delfine a rematch. There are big fights out there for me. There’s Amanda Serrano and I think that fight should be next but I am really happy to fight whoever.”

Josh Kelly and Philadelphia veteran Ray Robinson battled to a majority draw in what was another big step up for the rising Sunderland Welterweight talent.

The North East star once again showed his razor-sharp reflexes and quality counter punching early on but was pegged back by the Philadelphia southpaw in the second half, scores of 96-65 to Kelly and 95-95 twice seeing things finish all square.

On the scorecards: “Listen, he is the champ and to win you have to outwork him. I thought I did. He did a lot of moving his body, moving his head, and I stalked him. I feel like they brought a pup to a dog fight.”

On back-to-back draws: “At the end of the day, that’s why I am in the sport. I take chances. I am fighting other people’s fighters on other promoter’s cards and all that. If they feel like they are the best than they need to prove it to me. He was the champ and I thought I took his belt from him.”

Buatsi looked ruthless as he put Periban down in the fourth round, then finished him when the referee jumped in to end an assault on the 34-year-old Periban, a former Super-Middleweight title challenger.

On his performance: “I think it was just under a five. I rushed my work. I was too eager. I wanted to take my time. I thought I got a great win in my U.S. debut, I appreciate the welcome from the fans. Respect. I hope Antonio Periban is OK. He was slippery but once I hurt him, I thought, It’s time, it’s time.”

On where he would like to fight moving forward: “I’d like to fight back home but come out here once in a while. Hopefully in the future there’s going to be some big fights to come back here for. I am so glad to have experienced fighting in Madison Square Garden. I am humbled to be here.”

Tommy Coyle was reduced to tears as he suffered a stoppage defeat to Chris Algieri and was denied a fairytale victory in Madison Square Garden.

Coyle made an explosive start and almost stopped his New York opponent in the second round of a brilliant battle, but was eventually undone by a series of hurtful shots that forced trainer Jamie Moore to throw the towel in in round 8.

Algieri’s successful defence of his WBO International title puts him in line to face ‘Mighty Mo” Maurice Hooker for the WBO Super-Lightweight crown.