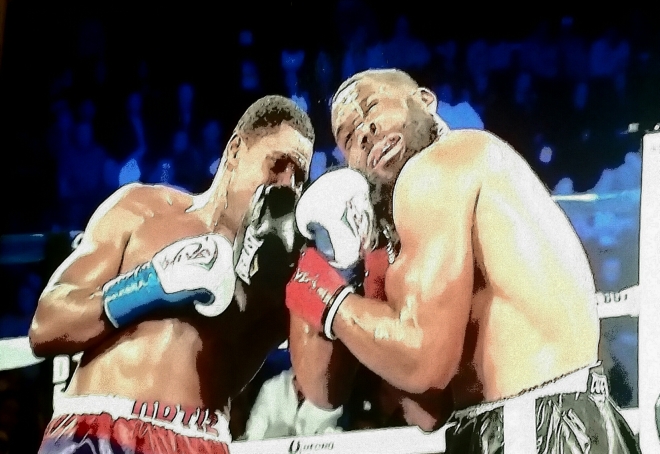 Ortiz was fighting a fight within a fight, teaching himself with lessons learned each passing round.

In the first round, Ortiz attacked the body and had Jennings in early trouble after landing a short right hook. Jennings was shook but made it to the bell.

I tested the right hook, good punch, it  hurt him but that’s not it, need another  approach…….

Bryant had a good bounce back round in the second landing solid body shots and right hooks mixed with a few uppercuts. Jennings’ speed was the difference in the round.

Must be careful, he’s crafty with speed and a hurt fighter is a dangerous fighter….

A tale of two halves in the third,  Ortiz first, again hurting Jennings, this time with a left uppercut then an overhand left. Jennings  the second half with more body work, and fighting in close to try and negate Ortiz ‘ s advantage when he fights at distance.

After a close fourth,  Ortiz got on his toes in the fifth,  popping his jab, while committing again to the body and landing another monstrous left uppercut.

There it is again, the uppercut, no doubt now, the uppercut is it. Must move to create distance, soften the body and the head will fall.

In the sixth, both came out swinging in the first several seconds but little else happens until Ortiz applies pressure and lands a solid combo at the bell.

Need to increase the pressure and go for it.  Time for the uppercut again but I’ll switch things up. He’ll think the left uppercut is coming but if I time it correctly,  the right will stun him just long enough to set up the power.

In the seventh, Ortiz lands a sneaky right uppercut and then two quick devastating left uppercuts in succession dropping Jennings to the canvas.

Jennings is up at the count of seven as Ortiz attacks and lands a short right sending Jennings flying into the ropes. As Jennings recoils off the ropes, Ortiz lands a left hook causing the referee to jump in and stop the fight at 2:41of the seventh.

It may not have been obvious to the casual observer of the sweet science but Ortiz ‘ s victory was calculated from the opening round.

A puncher with a high ring I.Q. is going to be trouble for any of the bigs and this big should be in for a sustained run.